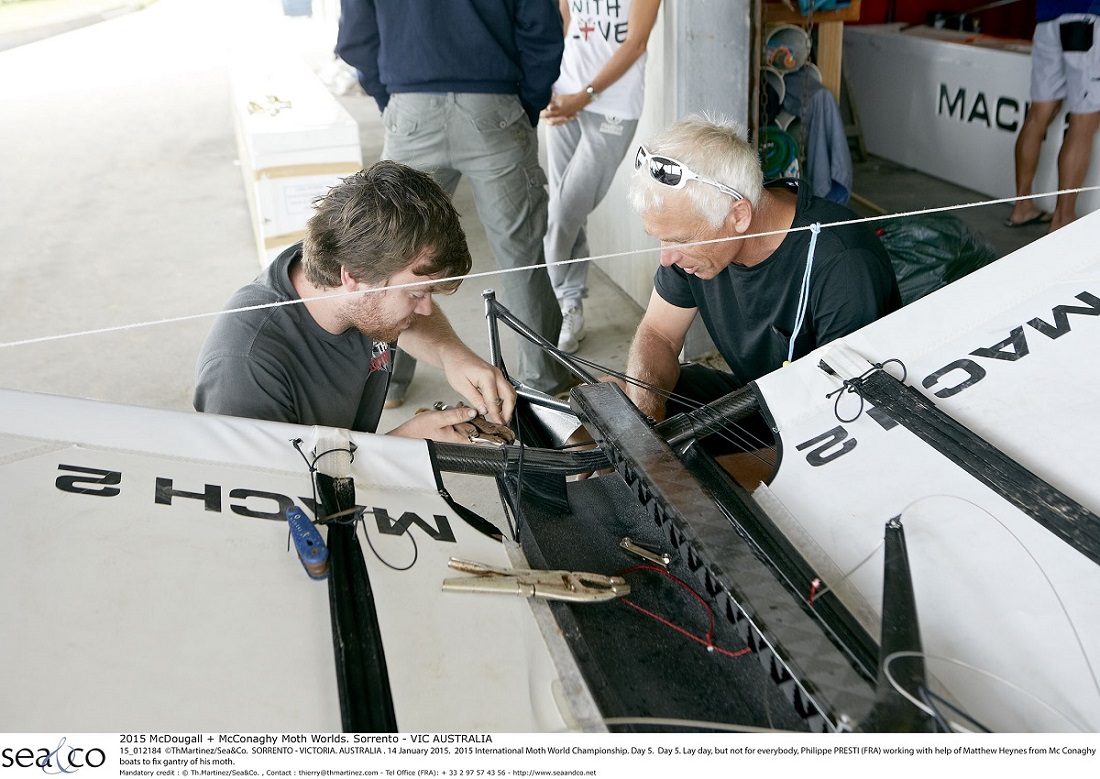 Around 90 percent of boats competing at the McDougall + McConaghy 2015 Moth Worlds at Sorrento Sailing Couta Boat Club (SSCBC) are Mach 2’s and when things go wrong via a crash or from the pounding of big seas, who repairs them ready for the next race?

The McDougall and McConaghy hospital at the SSCBC has patients every day. A purpose-workshop has been set aside right next to the beach where all competitors boats are. On Day 2 of racing, held in strong winds on big seas, there was a lot of damage.

There were lots of sick boats. “Every boat brought to us we were able to fix that night. On the face of it, it looked quite bad, but we got through it,” says McConaghy’s Matt Heynes.

“Literally, the guys come and queue. We do the repairs based on priority of getting boats back on water. We’re trying to keep everybody happy, but the goal is to get everybody back on the water in time to race. We’ve also had a few come in for quick fixes between races.

“It’s been a bit manic,” says Heynes, who has been here since the beginning. You don’t see his face or that of Simon Owen-Smith (he normally works alongside Andrew ‘AMac’ McDougall in his Beaumaris, Victoria, premises) when they are operating.

Both have had their heads down all week, attending to their ‘patients’ in what some have nicknamed “The hospital ward”. The workshop, Heynes says, “is a very good set up”

“When racing is over, it all begins for us. Before they go on the water, we finish any jobs from the night before. When they’re on the water, we start on our morning jobs. During the day we’re fixing things if one of the guys breaks something and comes ashore. And we’re finding spares,” Heynes explains.

This is the first time he has been involved in anything like this. “Seeing as McConaghy is one of the sponsors, Jono (Morris, the joint managing director of McConaghy) asked if I could help Andrew ‘McDougall and Simon to ease the workload.

“Jono had heard how busy the ‘hospital’ was at Moth Worlds in Hayling Island last year. It makes sense, as Andrew (who is also racing at the event) and Jono are sponsoring the event together,” the boat builder said.

Before arriving at Sorrento, the 27 year-old spent two days at McDougall’s office for one-on-one working on A-Mac’s new Moth.

There has been a lot of daily activity at the ‘hospital’. “I’m not really surprised about the amount of boats coming in for repair, from the perspective of the level that the fleet is at. The boats are now at the point where they are being pushed to their absolute limits by the best sailors in the world.

“Definitely we would consider doing this again. Everyone has always been appreciative of the work Simon has done at previous regattas. We will obviously be seeking opinions from competitors.

It’s been good in that it’s been sponsored by McDougall and McConaghy, and that we can give something back to the sailors. We’ve been working late, but we haven’t had to stretch ourselves beyond a point, but I guess you could call it pressured.

Simon’s been working at this for years, so he knows the boats inside out. This has been a good learning curve for me,” admits Heynes, who has recently returned from England where he worked for the renowned Green Marine in Southampton for the past year.

“It’s been good here – the atmosphere has been great – a really good experience as far as regattas go. The camaraderie with the sailors has been great.  Jono arrived on site yesterday as he likes to support all his builds and make sure all is going well. He’ll stay till the end,” Heynes finished.