Japan to the fore at McDougall + McConaghy 2015 Moth Worlds 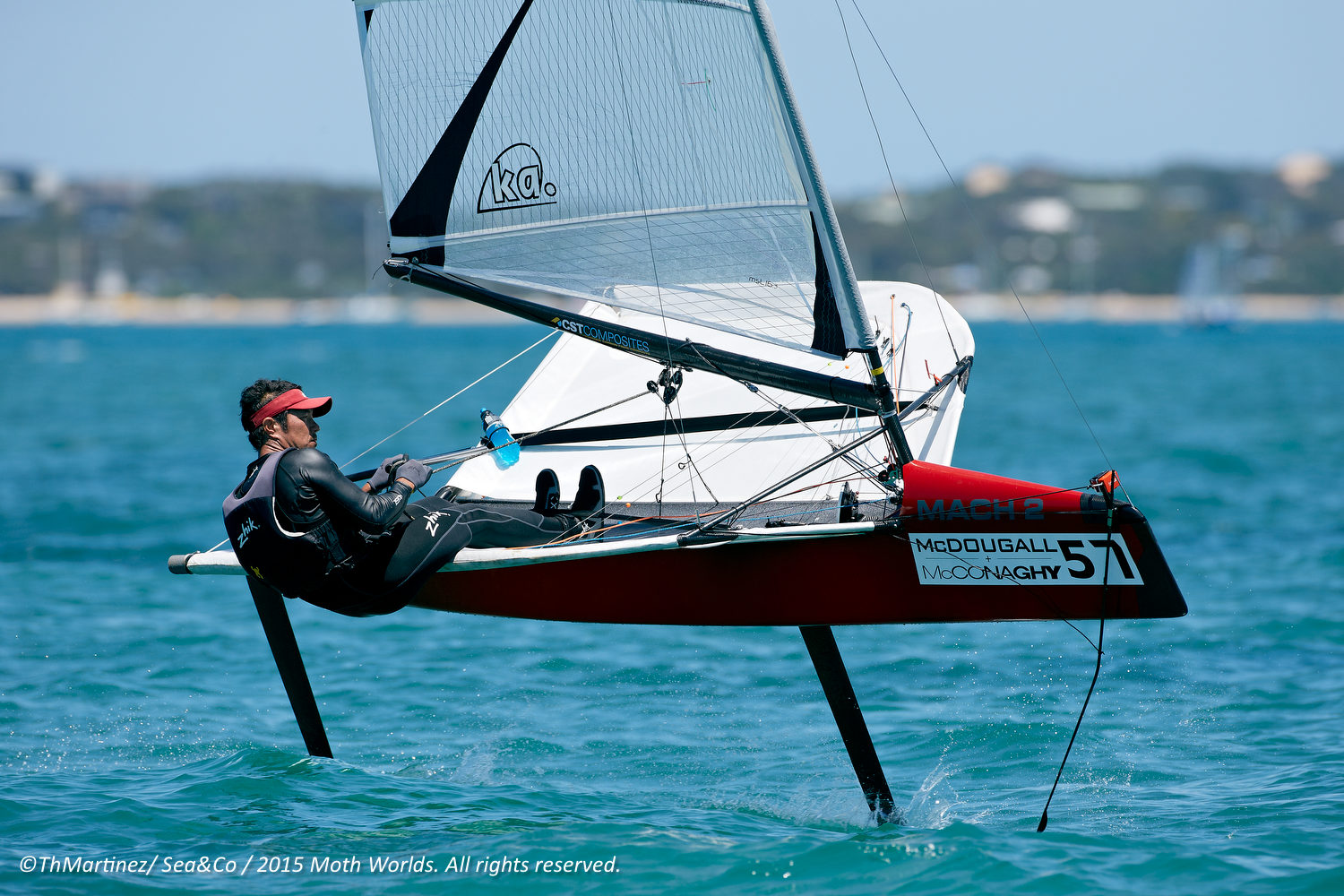 Japan’s Hiroki Goto unusually showed emotion after taking out Race 8 in the Gold fleet Finals of the McDougall + McConaghy 2015 International Moth World Championship being hosted by the Sorrento Sailing Couta Boat Club at Sorrento in Victoria.

“Japanese people do not show emotion, but I was leading. There was nobody in front of me and a big spectator fleet as I came to the finish. It was the most amazing feeling. I could not help it, I shouted out, because I was so happy. It felt so good to win,” Goto said.

Goto typically enjoys the breeze, “but I was in good shape from the beginning. I was in the top ten in the light breeze on the first day (he was third in the opening race) and now today I win. I don’t understand, as I feel best in 15 knots and sailing on flat seas.

“Today I just seemed to have the advantage – it is strange to discover I can sail in light wind. I was in second place for a while; Chris Draper (GBR) had a good lead. But I gybed and was sailing deeper and faster and I could gybe on my foils. Chris couldn’t,” said Goto, who took the lead at that point and has moved up to 14th overall.

Peter Burling (NZL) continued his good run with third place in a dwindling north-nor ‘easterly wind that petered out to 2-3 knots. Race officials abandoned further racing for the day at the conclusion of Race 8 for the Gold fleet.

Nathan Outteridge was timed out in 19th place (“that has never happened to me before,” the Australian said) and dropped down to sixth place overall, Burling now leads 2012 Moth world champion, Josh McKnight, by 11 points with a drop in play. McKnight finished fifth in today’s race.

Following 10th place Scott Babbage has moved into third place, while Great Britain’s Chris Rashley (GBR) is in fourth place after finishing eighth. On equal points behind him is fellow Brit, Chris Draper, who was second today behind Goto.

There will be cause for double celebration in Japan, as their only female contender Wakako Tabata has lead the Women’s since Day 1. Not only that, she is sailing in the Gold fleet and was very excited by her 48th place today. Why? “Because I beat Tom Slingsby – I beat Tom Slingsby,” she said, incredulous.

“I am surprised I am the leading woman. I have only sailed a Moth for half a year and I am sailing against women like Sam England (AUS) and Annalise Murphy (IRE),” Tabata said. England won the Women’s 2011 world title, while Murphy finished fourth at the 2012 Olympics in the Laser Radial.

Tabata represented Japan in the 470 Women’s at the 2012 Olympics. Beforehand, she won the 470 Women’s title at the Asian Games. Currently, she and Goto are campaigning for the 2016 Olympics in the Mixed Nacra 17.

“We have only been sailing the Nacra together for half a year also,” Goto laughs. “We are not very good, but I think now that both of us are sailing the Nacra and the Moth, we will only become better. That is the hope.”

Goto is also excited as the next Moth Worlds will be held in his hometown of Hayama, Japan. “Wakako also lives nearby. We are thinking about it already,” he ended.

Racing at the McDougall + McConaghy 2015 International Moth World Championship is due to start from 1100 hours tomorrow morning. 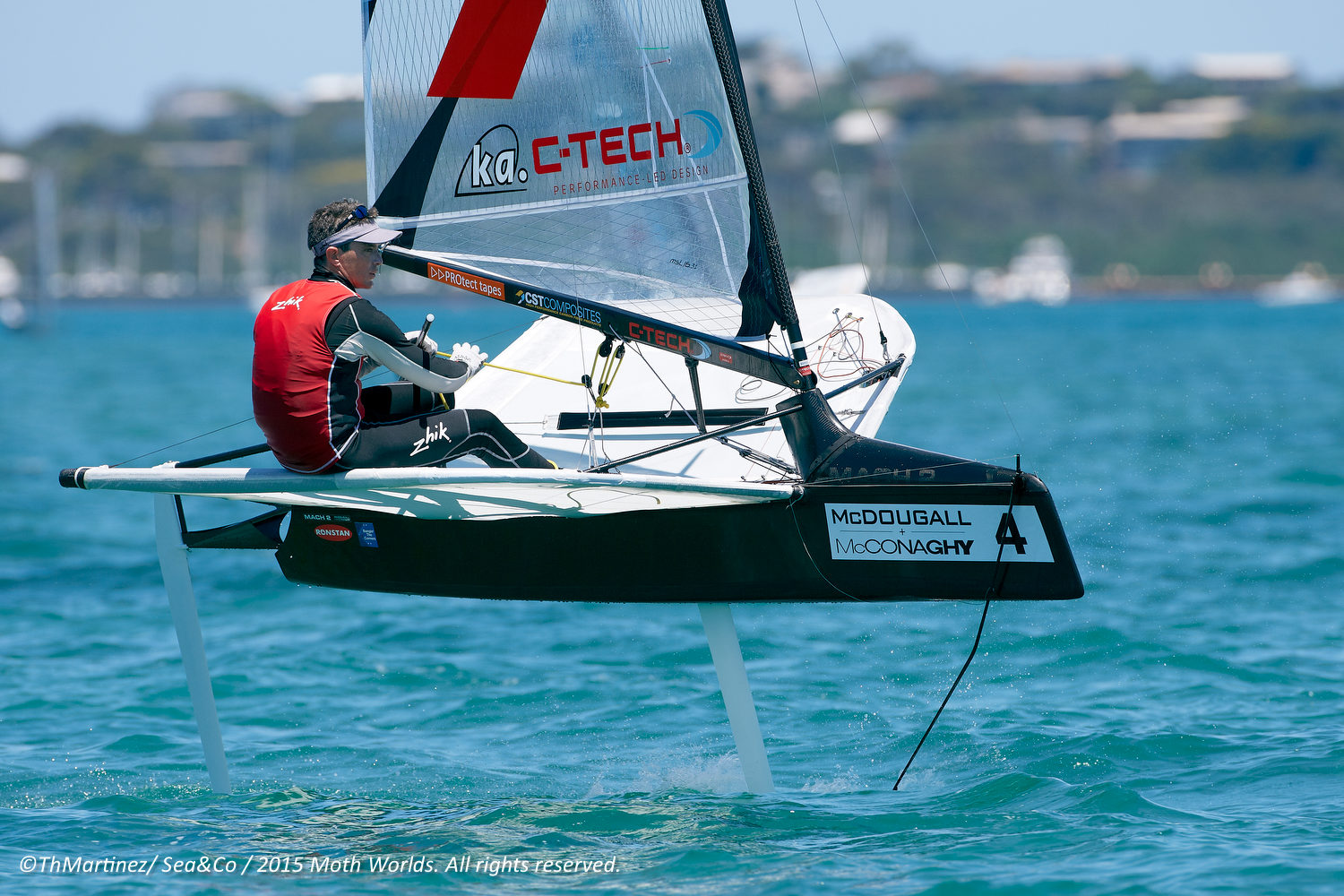