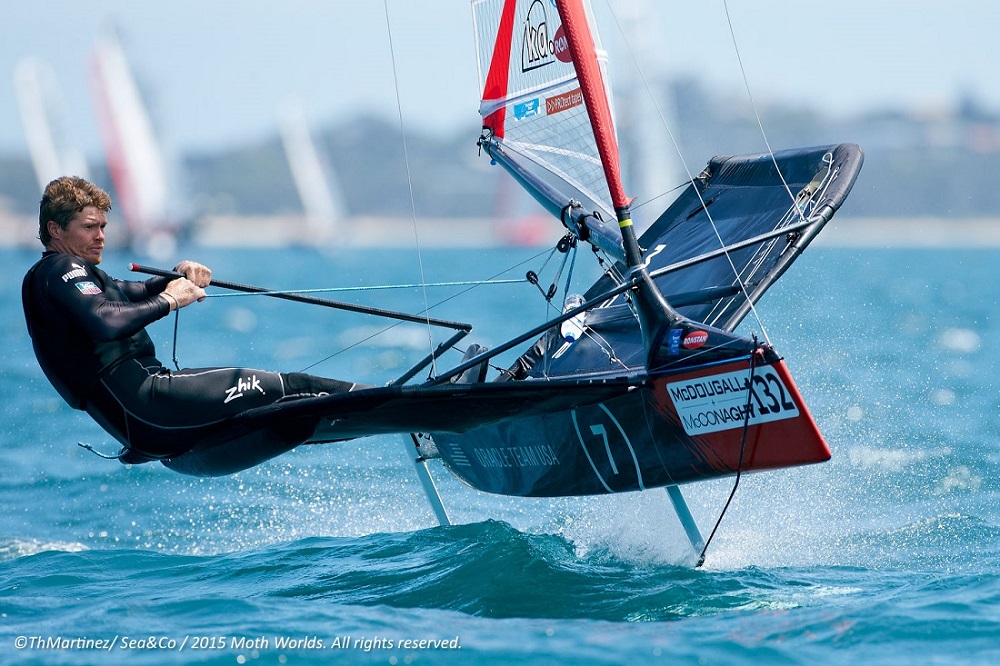 Oracle Team USA is fielding a team of five at the McDougall + McConaghy 2015 International Moth World Championship and all have made it into the Gold fleet Final’s. No mean feat when some, like Rome Kirby, have only been at it for three months.

“it’s been fun, a big learning curve,” says Kirby, a trimmer with the winning America’s Cup Oracle Team USA. “You are rewarded by time in the boat, that’s for sure.”

“it’s some of the hardest sailing all of us have ever done. But it’s something new, and I love to try new things,” the 25 year-old says.

Kirby and some of his Oracle teammates’ initiation in the giddy world of Moth sailing came when they descended on Nathan Outteridge and Iain ‘Goobs’ Jensen’s home patch at Wangi Wangi on the NSW Central Coast in October.

The location came on the advice of Oracle team member and NSW Central Coast sailor, Tom Slingsby. He chose it due to its similar conditions to Sorrento and because it was away from prying eyes. And it is a quiet place where they could focus solely on Moth sailing.

Doing so has paid dividends. The entire team made it into the Gold fleet Finals a few days ago. “We haven’t spent much time in the boat, so we can’t get too upset about results. There are a few good people in the Silver fleet who have been sailing Moths for five years and more at the top level,” the American says.

“These boats are super technical. There’s so much going on and everything changes, depending on the conditions,” he concedes, referring to foil selection among other things. “A lot of the principles are the same as sailing the America’s Cup boats though – including the foiling, which we’ve obviously done with the big cats.

“Big cats are obviously faster, but both boats test your reaction time and you have to have good boat handling,” ends Kirby, who became a sailing fan as a child.

He and father Jerry are the only father and son in memory who can claim winning the America’s Cup. Jerry was a bowman on America3 when it won in 1992, Kirby in 2013, in the biggest comeback since 1983 when Australia removed the Cup from American hands.

Tom Slingsby has a different mindset to Kirby. “Everything that can go wrong has gone wrong. I’ve finished top five in all but one race, but you’d never know it, because things keep going wrong,” he says.

“I keep breaking things. Yesterday I snapped off my heavy air foil before the start of the first race, so couldn’t race. In the second race I got done for being over the start half a second early. I’m now sailing with my light air foil in heavy air which has slowed me down,” said Slingsby who came here to win – and had a good shot at it.

“Being 90 kilos and hiking, I run into issues. It’s about keeping the maintenance up. I can’t stop breaking things and then I’m still fixing the next day, so I’m late getting on the water. So I have to get better at maintaining my boat,” the 30 year-old admits.

The top sailors say Slingsby is very quick upwind. “I’m quick downwind too, with the right foil. Even though his heavy air foil is broken, and thereby not a prospect for today’s racing in heavy air, Slingsby is on a mission.

“Even with my light foil I’m going to beat Pete,” he says of Peter Burling (NZL) the man at the top of the leaderboard with eight standout wins on his scorecard, double that of second placed Nathan Outteridge (AUS), the defending champion and Artemis Racing skipper.

“I’ve got to get him today; I’ve just got to do it. I am going to do it,” the determined 2012 Laser Olympic gold medallist and winning Oracle Racing Team strategist says. 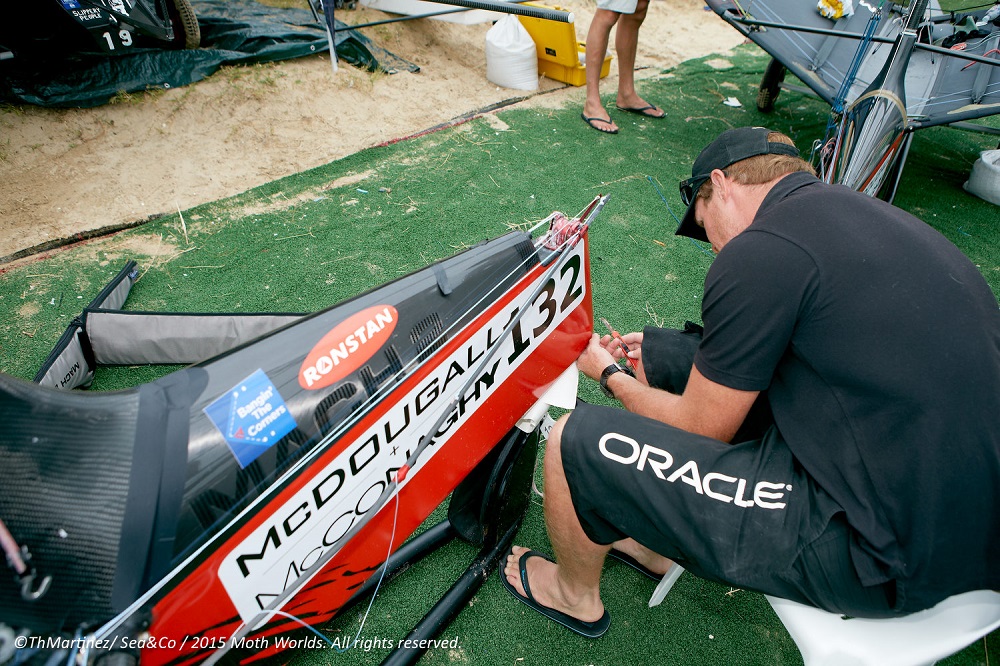 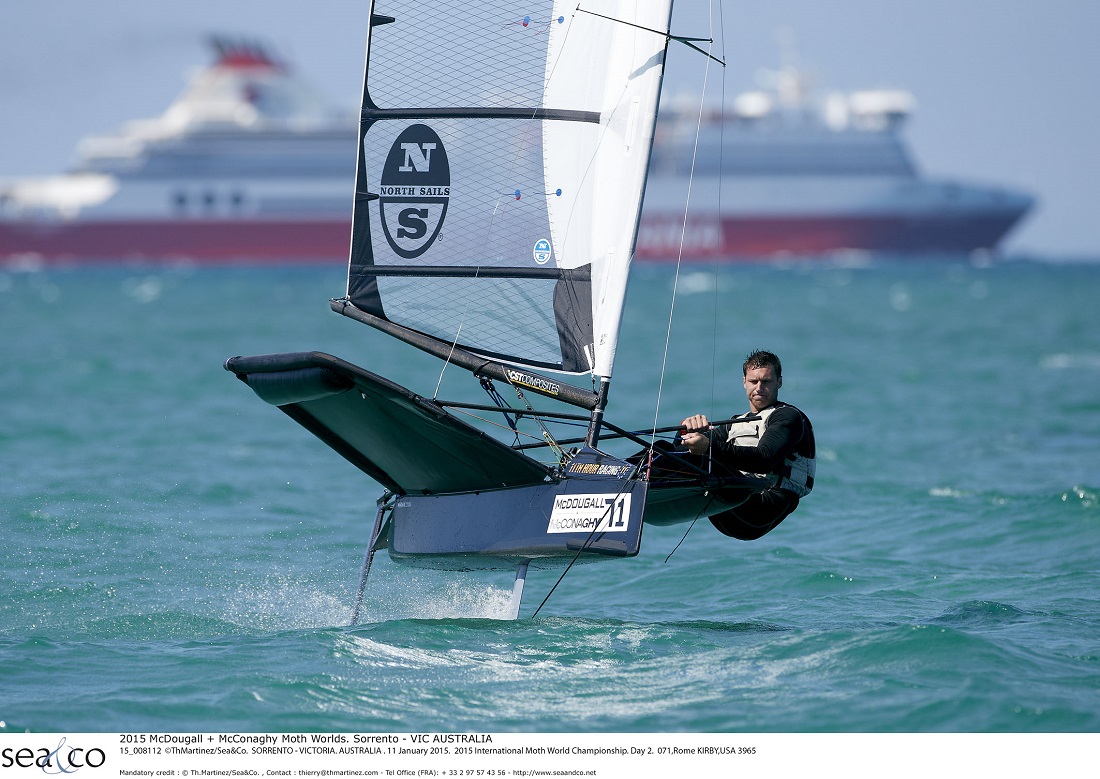