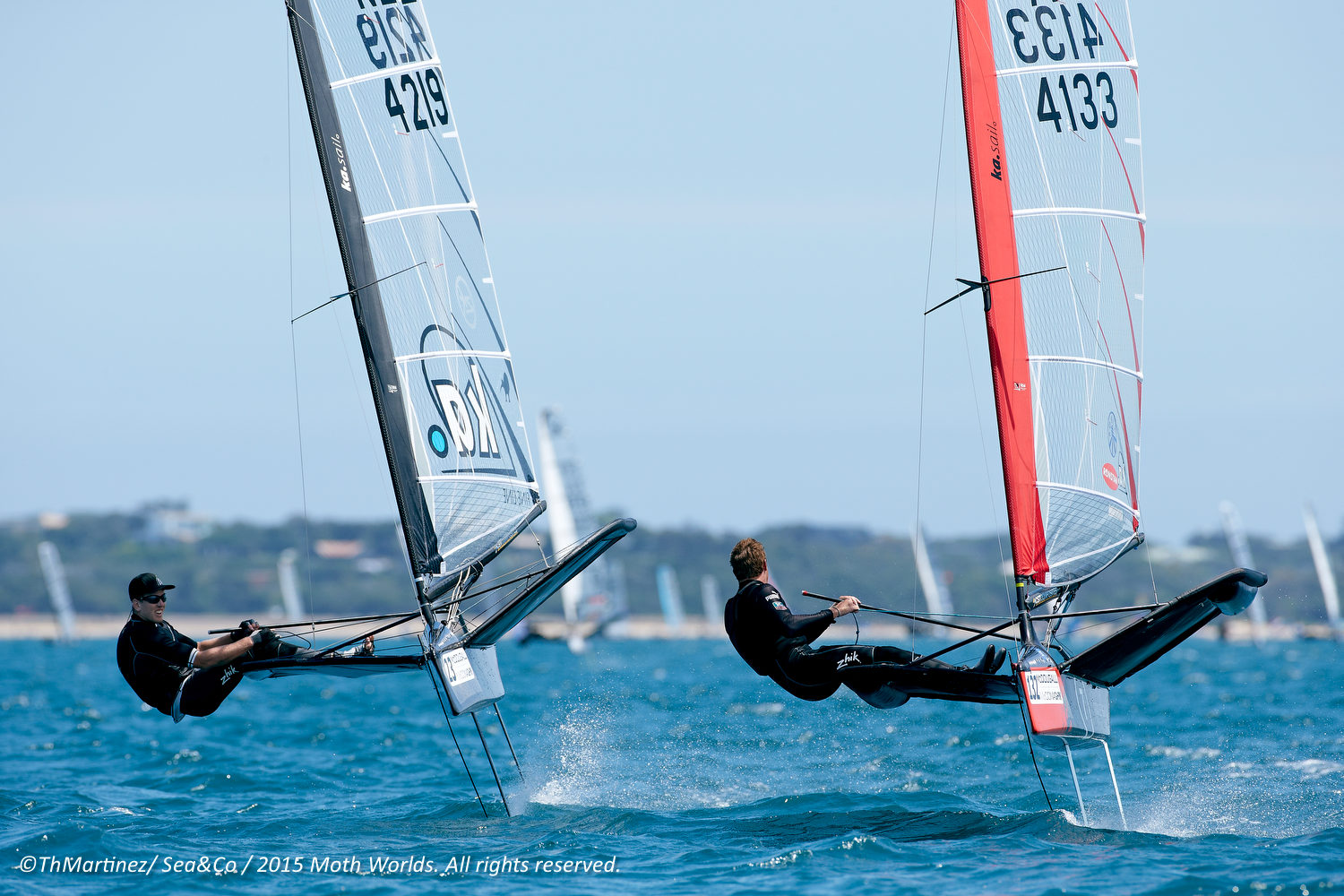 New Zealand’s Peter Burling reeled off four straight wins to take the lead on Day 2 of the McDougall + McConaghy 2015 International Moth World Championship on Port Phillip in Sorrento, Victoria, sounding the warning bell for the other 159 competitors.

With the fleet split into Blue and Yellow, Burling was in the Blue fleet on a course closer to shore. Defending world champion Nathan Outteridge (AUS) was in the Yellow on a course further out and on the receiving end of bumpier conditions and scored 3-2-2-1 results.

Two drops are in place following the seven qualifying races. Burling is on 5 points and Outteridge on 7. Tomorrow the fleet will be divided into Gold and Silver, with the top half of leaderboard going through to the Gold fleet.

Ashore Burling said: “I won all four races – the last one by over a lap, which is pretty pleasing in this fleet. it’s all come together here,” he said referring to his disappointing results at the Worlds in 2011 and 2013.

“I did well in the light and shifty weather yesterday and today was as good. I put a lot of work into improving my game for this event.”

“We were in flatter more manageable water than the Yellow fleet, but even so, I dropped off the foil at one stage and fell back to 11th, but I still got back and won. Everyone had a swim, or crashed or overtook,” the 2012 Olympic 49er silver medallist said of the course which was closer to the Sorrento Sailing Couta Boat Club, host for the event.

On Nathan Outteridge, Burling said: “Both of us have different commitments now – me with Emirates Team NZ and him with Artemis Racing (AC syndicates). We’re still good mates, but things are slightly different now. He is my biggest challenge for this title, of course.”

For his part, Outteridge said of Burling: “I’ll face him tomorrow, because qualifying is over and we’ll be in the Gold fleet. I beat him on the first day in light air – that’s what I’m best at, but tomorrow’s meant to be even windier than today… I’ll be OK, but I prefer the light.

“I was OK for the first race today, but then the current changed – the last race especially was full-on and I was just trying to keep up with the leaders. It was bumpy and hard going and we all swam at some stage; everyone’s feeling it.”

On his Yellow fleet opponents: “Five of us shared it around, me; Chris Rashley (GBR), Josh McKnight (AUS), Scott Babbage (AUS) the top four from the last Worlds in the Yellow fleet, so it was never going to be easy. Dave Lister got (AUS) amongst it too.”

Babbage is tucked into third place overall, a win in Race 6 giving him the jump on Outteridge’s 49er crew and fellow Artemis Racing team member, Iain Jensen, who sailed in the Blue fleet and is fourth overall after, “three good races, but I broke a bunch of stuff in the fourth… It was bumpy, crazy and full-on in the last two races,” he said.

Not so lucky was 2008 Olympic Tornado silver medallist and multiple multihull world champion Glenn Ashby (AUS). The Emirates Team NZ wing trimmer suffered extensive damage after a crash with one of the American boats in Race 6, dropping him down the board and cutting him out of Race 7, for which he will ask for redress.

“Lucky I’m a Sailmaker, so I can fix that, but I’ve got a broken foil and bow damage that will take a bit of fixing. Apart from that, it was a tough and bumpy old day, but awesome sailing.” 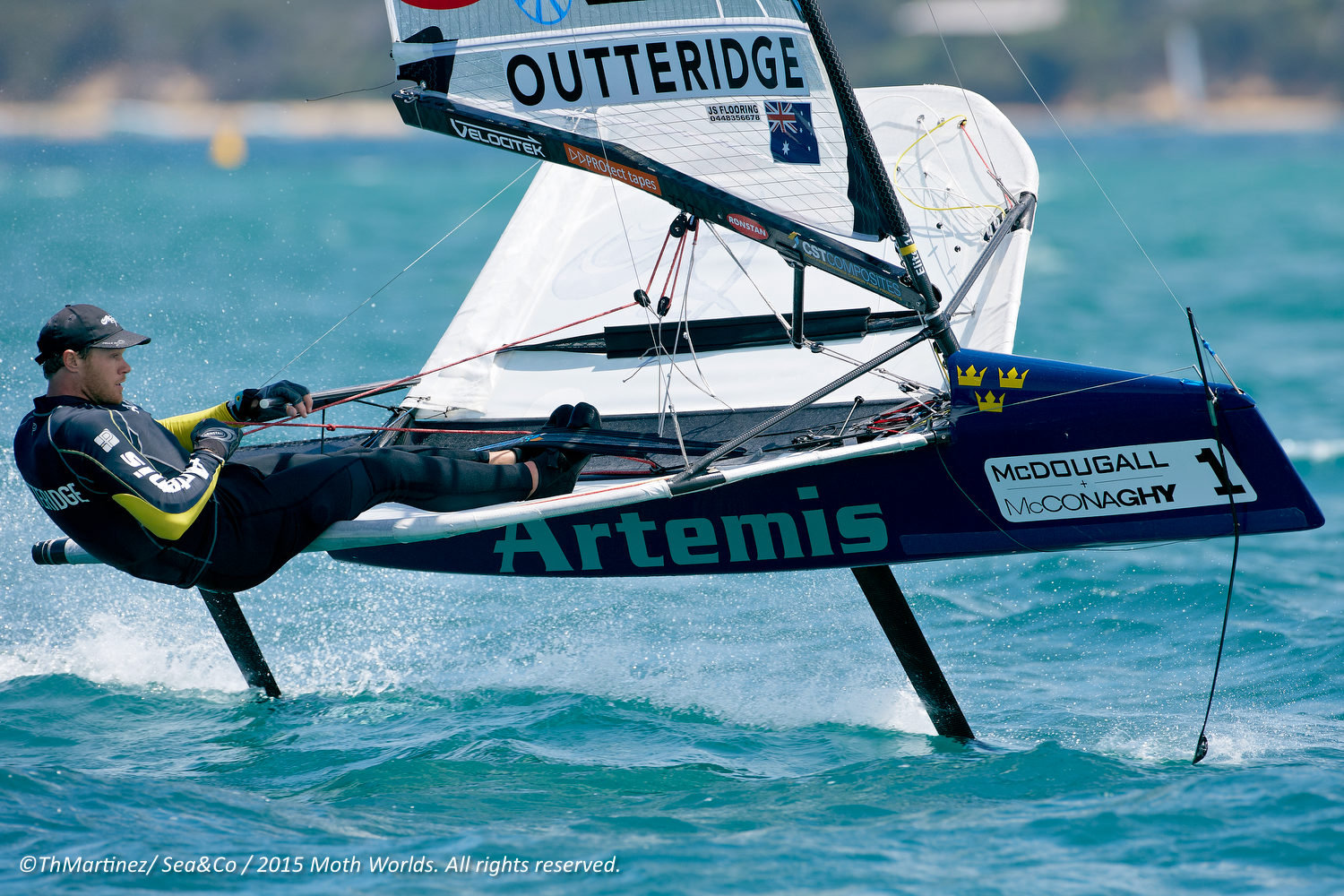 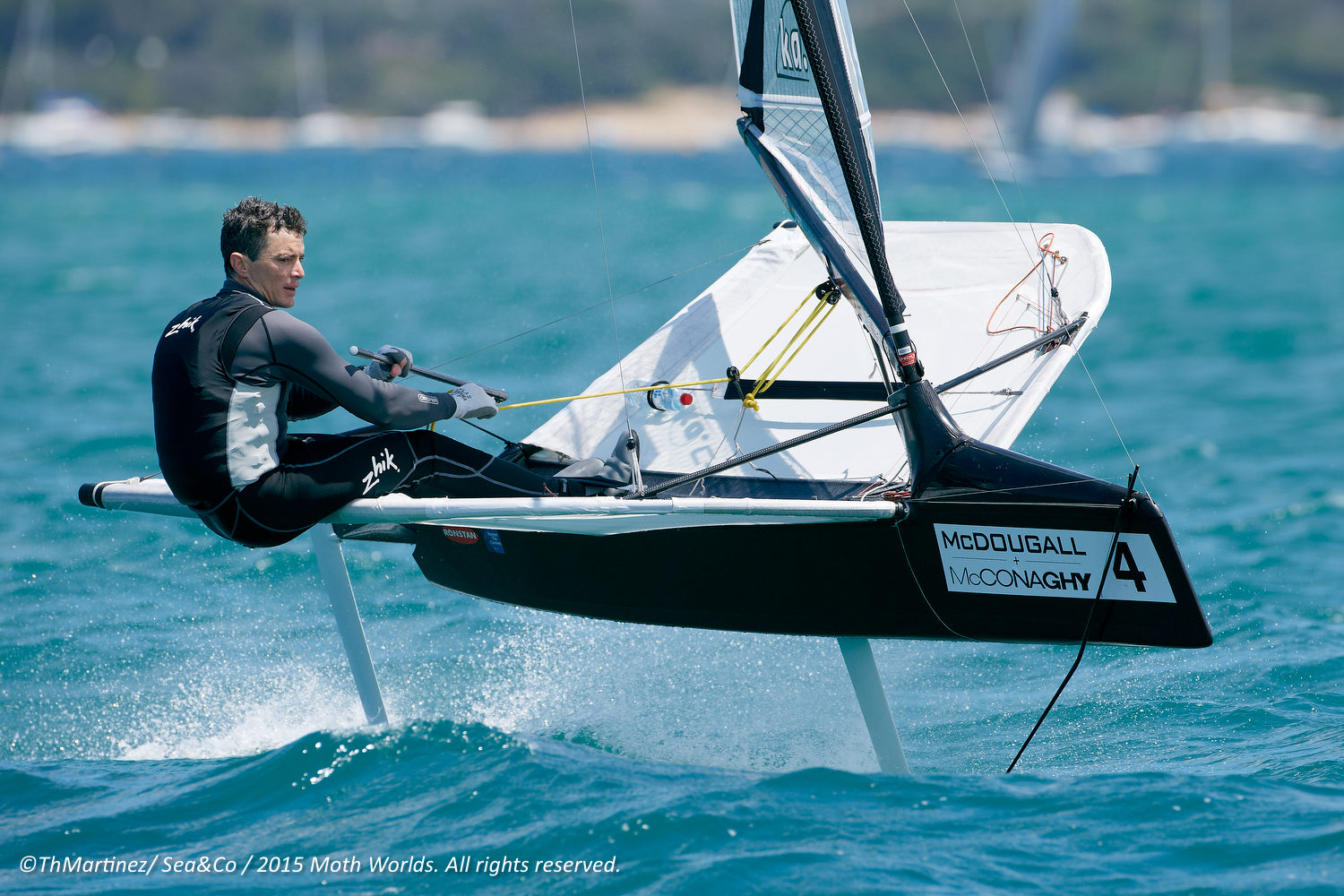