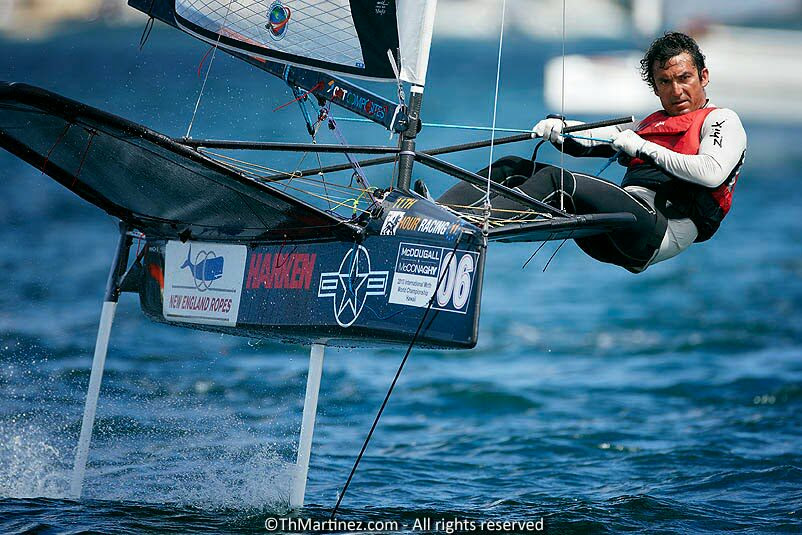 The delightful Mornington Peninsula in the Australian State of Victoria is renowned for many items in the natural and culinary worlds. One thing not referred to all that often are the sand or march flies that occupy the area during the Southern Hemisphere Summer. Most travellers know Australia for flies, but the sand fly is larger and bites. Good thing then that they are far slower and really easy to swat on your arm or leg. However, from January 9 to 16, 2015 another species all together are set to fly in. They are the International Foiling Moths and unlike the sand fly, they are really, really quick.

Sailing’s equivalent of the luge or the squirrel suit weigh just 26kg, fly at about one metre above the water and travel at around 60km/h. Based out of the iconic Sorrento Sailing and Couta Boat Club, the 2015 McDougall + McConaghy Moth World Championship will be sailed on the Southern stretches of Melbourne’s Port Phillip. It is a relatively shallow, but expansive 1950km2 bay that holds 25km3 of water and has already been the location that hosted the 2005 Moth World Championships and also similarly for other classes like Etchells, Dragons and OK Dinghies.

At that time of year, the breeze tends to blow from either the South to Sou’west or alternatively the North and be 10-25knots, which is more than enough to make it an extremely exciting affair for these speed demons. If it is from the Southern quadrant, then the seas will be mostly flat and these craft will literally take off. Should a decent Northerly blow in, then the seaway will build quickly and it will add to the overall excitement and spectacle of it all, just as smartly.

Now there are two men of note who are very much looking forward to the 2015 Moth Worlds. One is indelibly linked to the class and this championship, for his name appears in the sponsors’ title role and he’s racing in it. The other is a former, two-time Foiling Moth World Champion, and both call Melbourne home.

Andrew ‘A-Mac’ McDougall is the man most responsible for taking the Moths on foils into the main game with Bladerider and then Mach2, well before the AC cats sailed above the water. A-Mac is sailing in the 2015 McDougall + McConaghy Moth World Championship. “Definitely keen to see if I can get that elusive world title, but the body is creaking a lot these days, so I’m realistic as well. A top ten finish would make me very proud. I no longer have a serious speed advantage over the fleet, as they now all have the gear that I developed, so it is far more even out there now.”

“Sailing a Moth is not about being graceful, because there is just no mastering these beasts. If you’re worried about looking tragic, because it will happen, then choose something else!”

McDougall has just returned from coaching Emirates Team New Zealand and is now off to Lake Macquarie to conduct a training camp for Oracle Team USA. “The boats have become more stable through better design, but more adjustable as well. There a lot of nuances you have to know about and then how they match various condition sets. On-water adjustment of every control is really the norm now. It is the one area I can bring a lot to the table for these America’s Cup (AC) teams, as well as years of experience.”

“This will be by far the most contested World Championship we have ever had. So many AC and Olympic sailors are on their way to Sorrento. There are a lot of young guys in the fleet and they are much more agile than us experienced chaps. If it is a windy series it will suit the younger generation, whereas if is lighter it will favour the veteran crowd who will have a full suite of skills with all of those nuances we have just talked about. However, it can all be offset, just by missing one foiling tack, and you could find that you’ve blown your regatta right there!”

“The Moth is the only successful, open development class left because it so small. It is relatively cheap to use top-level technologies, as it does not place it in the hands of the world’s billionaires. However, no matter how much tech you have in the boat, you wont get a win from that alone. It is all about the user-friendliness of that technology and then how you sail it”, McDougall finished by saying.

Rohan Veal won the last Moth World Championship held on Port Phillip, back in 2005. It was held out of the Black Rock Yacht Club, further up the expansive track known locally as, The Bay. Veal commented, “This was the first time we had a decent number of Moths up on foils. There were around 10 of us and the rest were low-riders. I had been at foiling since 2003 and had been practicing a lot over the Summer just prior to those championships. It must have worked, for I won every race in the series, which had not been done before in the Moth.”

“I do remember winning one race by 17 minutes (over another Moth legend, Simon Payne) in light winds, as I stayed up on the foils. I had been working so hard on getting my technique right. Port Phillip can get rough, which is really hard when you’re up on foils. Indeed one day was totally blown out. Come the last day of the regatta we had just four races in the bag and needed five for a series. Thankfully, another four were run on that final day in absolutely glamorous conditions.”

Veal went on to win the 2007 World Championship as well. This time it was on Italy’s stupendous, Lake Garda, and he did so in similarly spectacular fashion. “It was really difficult in 25-30kn and you felt out of control most of the time. Somehow I did not capsize in that particular race and lapped the second place getter. Back then it was all about control. Practice, practice, practice and manage that lift. When it is tough you have to remember that in order to finish first, first you have to finish. A-Mac could have won two (World Titles). He pushes so hard and damages his craft, which totally blows his regatta.”

“It will be a lot more protected from those Sou’westers at Sorrento. No, I am not dusting the boat off and racing, but I will be there! Rob Gough and Nathan Outteridge are good at getting their altitude correct. You have more controls in the boat now to manage it. Ride height adjusters reduce the risk downwind in big seas of having a major stack”, said Veal.

“The talent pool for this regatta is going to make it super competitive. It would have to be the most ever for any dinghy class – simply unreal. Just count the world titles these people have won in Moths and other classes. Glenn Ashby has 12 alone, plus two Olympic medals. There are easily 30 titles and 12 medals in the group and then there are America’s Cup stars like James Spithill and Tom Slingsby.”

When you look at the entry list it really is a bit like a dream team. There are likely to be six from Emirates Team New Zealand, the same number from Team oracle USA and Nathan Outteridge heads up a contingent from Artemis. The great Iain Percy, who at 100kg is a true heavyweight, is also set to be out there. “It is pretty physical, especially if you go down a lot and have to right it several times, but you keep learning and getting better”, Veal finished by saying.

As these two experts have already identified, some of the world’s greatest sailors are set to descend on Sorrento. They include superstars like reigning Moth World Champion and Olympic hero Nathan Outteridge, as well as luminaries like Bora Gulari and Glenn Ashby. There are also local young guns such as brothers Sam and Will Phillips, Harry Mighell and Sam England, who is part of a burgeoning female squadron amongst the fleet.

Before all the fun and spectacle there is the Victorian Moth Grand Prix on November 1and then the Australian Championship from January 6 to 8. Sailors making the journey to this extremely popular holiday destination are reminded that the home stay offer closes on October 31. Please go to this link for all the relevant information –http://www.mothworlds.org/sorrento/about-sorrento/accommodation/

Shore crew have a plethora of options for non-water entertainment, ranging from horse riding to spas, chocolates to wine, bread to gastronomic delights, views at every corner, any number of beaches and a National Park that backs onto the world-renowned Bass Strait. If you decide to go for a plunge on that side of the peninsula, just remember to swim between the yellow and red flags!

Now if you’re thinking about foiling your Moth on waters used by many a class for their World Championship, then book in now via www.mothworlds.org/sorrento. Where as if you are going to be in the area during January, make sure you check out sailing’s developMENTAL class. Unlike the sand flies, you won’t have to worry about swatting the Moths, for they do a good enough job of that all on their own. The 2015 Moth World Championships are proudly presented by McDougall + McConaghy.

To be a part of the Social Media programme, join the conversation via #mothworlds15or go and like www.facebook.com/mothworlds 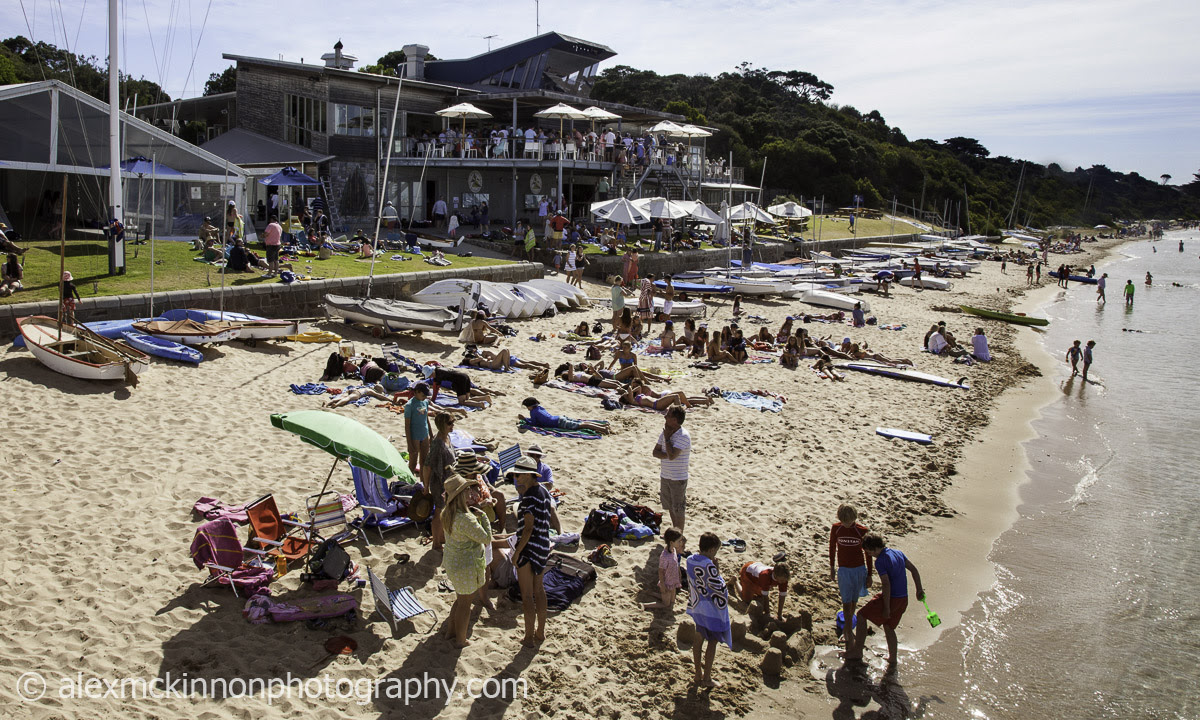