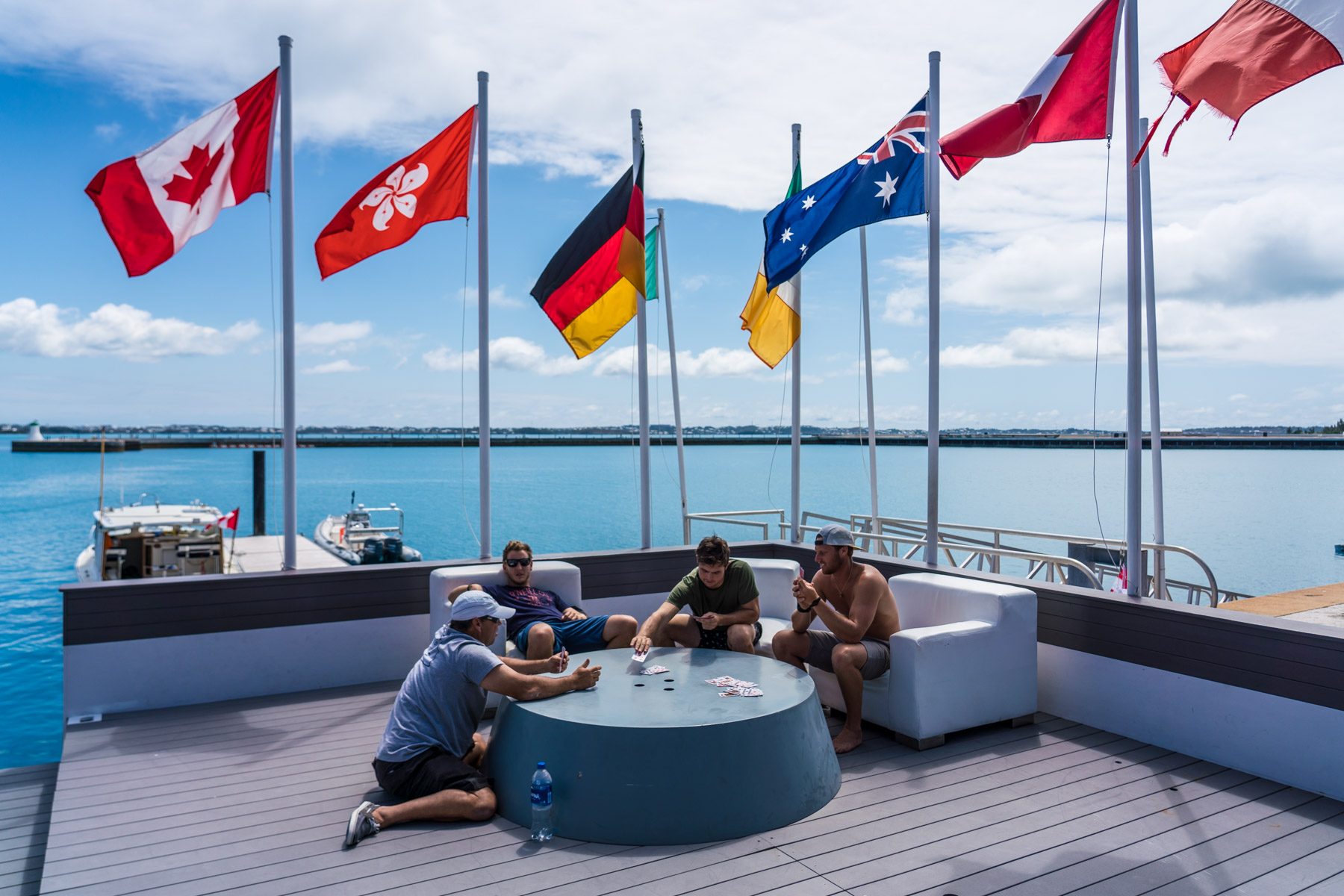 The standings remain unchanged with British sailor Paul Goodison on the cusp of winning his third consecutive Moth Worlds. He leads the regatta with the low score of six points, good for a 13-point lead on Francesco Bruni of Italy. Rome Kirby of the U.S. holds third with 23 points.

Despite the lack of racing there was an abundance of information shared today among the fleet. Goodison and Australian Iain Jensen, who placed third at last year’s Worlds, took part in a tech talk, describing their setups and what makes them go fast.

Both sailors have Exocet boats built by Maguire Boats of the U.K. with the standard foil package. The Exocet boat is being raced by approximately 75 percent of the fleet and currently holds the top 17 positions on the leaderboard. It also has won the past two world championships.

The most notable difference between Goodison and Jensen is the choice of mainsail. Goodison uses Lennon Sails and Jensen North Sails. They’re both deck sweepers, which each skipper says is becoming the norm in the class. The deck sweeper main places more sail area down low near the gooseneck (the boom attachment point on the mast), but the differences lie in the shape and construction of the two sails.

Goodison has worked closely with Lennon to develop the new A5m. It is a membrane sail with Technora fibers laminated between two sheets of Mylar film for a 1.5 mil thickness. According to Goodison, his sail is the fifth generation since he won his first Moth World Championship in Japan in 2016. A Moth mainsail is limited by the total area and the Lennon sail trades off some length in the leech and foot to accommodate the deck sweeper.

Goodison didn’t go as extreme with the deck sweeper as he might’ve been able to because he still has to clear under the boom during tacks.

“I’ve opted for a deeper sail with more twist because I feel it’s easier to sail than a flatter sail with a straight leech,” Goodison said. “To depower I pull on the cunningham and that opens up the top of the leech.”

Jensen is among a few sailors using the new North 3Di polyester sail. North’s sail is a composite construction that uses filament tapes to maximize the fiber’s properties. North says that is sail is stronger and lighter than membrane sails made of comparable materials. Some sailors have said that the sail is too flat but Jensen is not in that camp.

“My North sail is straight out of the box. The polyester material in the 3Di seems more stable compared to the 3DL version,” said Jensen. (North’s 3DL sail was a membrane sail.) “I think North has done a good job getting the mid-leech to stand up when the head twists off.”

The two sailors also addressed topics such as the crossover windspeeds for large foils versus small foils, how they maneuver and their pre-race preparations. Goodison might’ve summed up everything by saying, “There are many different ways to setup and sail the boat. You have to match it all to the equipment you have.”

The 77th Moth World Championship is scheduled to conclude tomorrow.